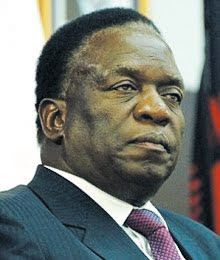 Barely 24 hours after being fired from government, Mnangagwa, who was in the company of four other people believed to be his relatives, had a torrid time trying to exit the border despite the fact that their passports had already been stamped.

Eye witnesses who spoke to TellZim News said the problem started when Mnangagwa's car was being searched by security details at the border.

"When he reached the exit gate, it took almost 20 minutes searching his car and at that moment he disembarked the car after being delayed. The gate pass was for five people but only four people were there.

"He started walking back to the entrance gate but no one identified him then as he was wearing a poor boy cap. He was stopped by police who grabbed him from behind but stopped after noticing who he was.
"Another policeman who had his AK47 cocked was unfortunate as he was kicked by Mnangagwa's aide who had come to whisk him away. They fled the scene in two cars while the other car managed to cross the border," said the source.
The incident happened in the morning and when TellZim News arrived later, the incident was the talk of the town.top news
Share !