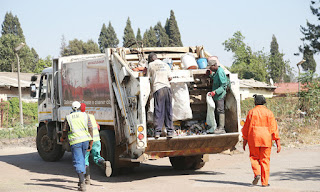 GWERU – Council has admitted that it lacks capacity to collect refuse across the city owing to broken down waste removal vehicles and will soon outsource the service to private companies, TellZim News has learnt.
This comes shortly after council announced it was putting back to tender the supply of service delivery vehicles because the company that won the initial bid failed to do the job citing foreign currency shortages.
In a circular drafted after a special council meeting held recently, the city said it will contract private transporters to collect waste.
"Following the challenges experienced in the collection of solid waste due to inadequate refuse compactor trucks and frequent breakdowns due to ageing, the City of Gweru invites interested members of the community owning trucks ranging from 3.5 tonnes to 10 tonnes to submit their bids to the director of health services for consideration and possible hire of their vehicles for solid waste removal," reads part of the circular.
Residents who spoke to TellZim News, however, were of the opinion that the plan will breed more corruption and patronage.
"No promise given to us residents has ever been fulfilled and all they think about is fattening their pockets. Think of how many of them or close relatives own such trucks? It's those people who will be given the tenders and none of the plans are meant to serve us," said a resident.
Learnmore Tafirenyika of Ascot said he expected nothing to improve as all council initiatives in the past have shown to be either ill-conceived or were made to promote self-interest.
"We have experienced poor service delivery by city council for a long time now and as the people, we have no confidence that their latest plans are well-meant. The people are throwing waste everywhere because they don't have a choice," said Tafirenyika.
The council has targeted areas like Woodlands, Ascot, Northleagh, Athlone, Nashville and KMP-Senga for waste collection by the private truckers.local
Share !