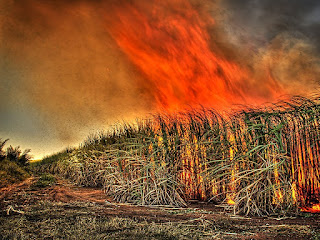 CHIREDZI - A Hippo Valley High School pupil took shelter in a sugarcane plot after her parents chased her away from home but nobody knew that those were to be the girl's last moments alive as she would, some hours later, die of severe burns.
The incident, which happened on October 23, saw the minor being severely burnt before being airlifted to Harare where she died of her excruciating injuries.
Masvingo acting police spokesperson, Assistant Inspector Kudakwashe Dhewa confirmed the case and urged parents to be tolerant as all children have their own flaws.
Sources said Martha Hlupeko, who was doing her form one at Hippo Valley High School and residing in Section 7 Hippo Valley Estates with her mother and stepfather, had quarrelled with her mother because she had arrived home late.
The misunderstanding reportedly started with the girl's mother, who had been away on a visit, calling to request that Martha wait for her on Section 7A bus stop.
The girl complied but upon noticing that it was getting late, shifted to Section 7B where there was some light and she failed to see her mother arrive in the process.
She then gave up on the wait and went home, only to find that her mother was already there and was angry as she suspected that she had been with her boyfriend.
After being chased from home, Martha went to her boyfriend to consult him on what to do but he could not accommodate her so she decided to take shelter in a nearby cane field for the night.
"She went to her boyfriend who is an employee at Hippo Valley Estate but he could not accommodate her so she took shelter in the plot which was then set on fire early the following morning to prepare the cane for harvesting," said a source.
Martha was discovered the following morning by Hippo Valley employees who reported the case to the police and the girl was taken to Hippo Valley Hospital before being airlifted to Harare where she died.local
Share !