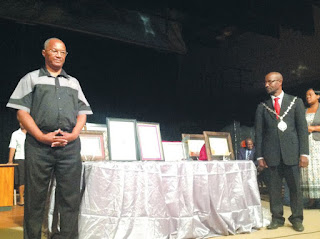 Gusha and Fidze standing beside the awards after the unveiling ceremony

MASVINGO - Council on Tuesday unveiled various Civic Awards won by the city over the past year, with emphasis being put on improving service delivery.
The Civic Awards were won during the 2016/2017 period as various stakeholders noted improvements in such fields as service delivery, budgetary control, gender equality, municipal services and community engagement.
Addressing people who came to witness the unveiling, City of Masvingo mayor, Hubert Fidze said council was preoccupied with improving services especially the provision of sufficient clean water to drink as well as regular refuse removal.
He also said vehicles purchased through the road levy were now being used to resurface some roads around the city.
"These Civic Awards are a testimony of the cordial relationship between residents as ratepayers and council. Without unity and working together among us, we could not have won these awards," Fidze said.
City of Masvingo Town Clerk, Adolf Gusha also weighed in and praised the unity of purpose that he said existed in council despite the Councillors being of different political persuasions.
He emphasised the need to ensure that essential services like water, sanitation, health and burial facilities are always available regardless of who is in charge.local
Share !