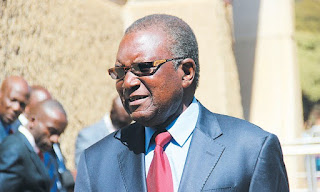 MBERENGWA - The Biometric Voter Registration (BVR) exercise in Mberengwa's Ward 30 has been marred with controversy with some areas said to be turning away suspected MDC-T supporters.
Zanu PF heavy weights July Moyo and Joram Gumbo are said to be now supervising the registration process at Humbani business centre, a situation many say is intimidatory.
MDC-T Midlands secretary for information Munyaradzi Mutandavari said their people are being threatened by Zanu PF youths who go around telling people to submit their registration slips to Gumbo or face the music.
"Our people in Mberengwa are being threatened into submit their registrations slips to Gumbo or be victimised. As the provincial leadership, we are surprised especially when top leaders like Gumbo stoop so low as to deny citizens their constitutional right," said Mutandavari.
Places like Gaha Sandawana and Chimbapire in Ward 29 and Ward 30 are the most affected.
"We have noted with concern that the most affected areas are resettlement areas and we have alerted our top leadership. We hope by the end of the BVR second phase, some corrective measures would have been put in place," Mutandavari said.
Efforts to get in touch with Moyo or Gumbo were fruitless as their mobile phones were unreachable by the time of going to print.local