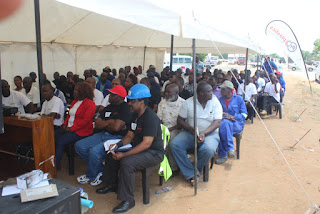 MASVINGO - Major Family Savings (MFS) and Proplastics last week hosted a joint workshop for plumbers and engineers in the city as part of efforts to improve product understanding among the artisans.
Proplastics, a leading plumping products manufacturer specialising in the production of Polyvinyl Chloride (PVC) pipes, has partnered MFS as their agent in the province and elsewhere.
Speaking at the workshop, MFS general manager Paul Johnson said he was pleased with the workshop which he said will enable the two corporate partners to serve the market better.
"We would like to serve you, to serve you to the best of our abilities. We believe that well-acquainted artisans will give both the investor and the market their money's worth. Well-informed artisans know how to properly lay down the pipes to specifications.
"A customer can recommend a good artisan to 10 other customers and likewise, a bad artisan can be easily known by 10 other potential clients. This workshop is therefore all about sharing knowledge and exchanging ideas on how to best make use of Proplastics products," said Johnson.
Proplastics key accounts manager Thomas Jongwe said the company valued the platform as it provided an opportunity for face-to-face interaction with key stakeholders.
"When we build, let's build to last. That can best be achieved through this kind of interaction. Our pipes are of the best possible quality but we understand the importance of ensuring that the artisan is trained on how best to utilise them for the sake of maximum durability.
"We are excited with our partnership with MFS because they have a wide distribution network and this means you can find Proplastics products at every MFS branch," said Jongwe.
City of Masvingo Engineer Towanda Gozo, who was the guest of honour, described Proplastics as 'the city's all weather friend'.
"As a city, we were once engaged to a supplier who decided to discontinue a product range. What that meant was that the spares needed for our existing infrastructure were no longer being manufactured. We then approached Proplastics and stated our predicament and they agreed to bent over and begin manufacturing those products specifically for us. Such flexibility is hard to get," said Gozo.
Proplastics was formed in 1965 and most of its pipes that have been laid down over the ensuing decades are still intact underground. The company manufactures water, sewer and irrigation pipes.
"We are happy Proplastics is here because we no longer have to go as far as Harare and Bulawayo to purchase their products. Their PVC pipes are light and can be transported easily from the shop to the site," Gozo said.business
Share !