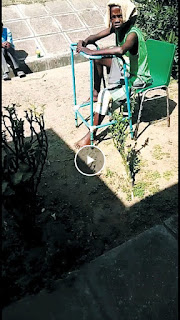 Energy Sinina with his injured leg in bandages

MWENEZI - A Mwenezi Primary grade seven pupil had to write his exams on a Neshuro District Hospital bed where he was rushed after sustaining severe injuries from a crocodile attack he suffered while crossing Mwenezi River on his way home from school.
Esau Sinina of Sosonye village five under Chief Chitanga confirmed to TellZim News that his son, Energy Sinina was still admitted at the hospital after his leg was savaged by the sneaky reptile.
"He was crossing Mwenezi River at the usual crossing point and in the company of other pupils when he was attacked. They had noticed that the water was unusually dirty but little did they suspect that it could be the work of a crocodile and when he was attacked, his friends ran away.
"The river is shallow at that point so the crocodile dragged him for about 10 metres but he never ceased punching it with his fist on its ear and the reptile finally let him go. A man later arrived at the scene but the boy had already dragged himself out of danger," said Sinina.
He said he hoped his son would soon recover from hospital though he said he believed the attack had inflicted permanent scars on him.
Mwenezi Primary School head Ndlovu said the boy wrote the last three of his grade seven final examinations while in hospital.local
Share !