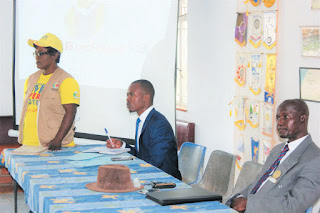 From left... Mrs Murumbi, Wellington Bakaimani and Chief Mapunzure  follow proceedings during a workshop recently held by My Age.

MASVINGO - MyAge Zimbabwe will soon introduce its Bio Buddyz10, an initiative meant to exploit existing social ties among students and people with disabilities in a rigorous drive to encourage them to register as voters.
The model seeks to make use of the already existing network of peers who are connected through common interests to encourage young people to develop an interest in electoral processes.
Addressing youths at Charles Austin Theatre last week Friday, Bio Buddyz10 project manager Joseph Njowa said MyAge will create accounts for those interested in participating in the initiative.
Those interested are given a challenge to recruit as many registrants as they can and post pictures of the registration slips on their accounts.
"We will open Ballot Buddyz accounts for each Buddyz Champion so those interested can come and join and we will monitor these accounts and identify winners," said Njowa.
The targeted people are youths aged between 17 and 35 years residing in Masvingo rural and urban areas as well as Chivi district.
At least 9 000 youths are expected to be reached through the ballot buddies and those that recruit the most youths to register to vote will get cash prizes.
The 'Championeer of Champions' will get at least US$50 prize money with many cellphones, powerbanks and flash drives also up for grabs.
"A process is already underway to identify youths in the targeted districts prioritising opinion leaders, celebrities and young people who have been active in the youth engagement project," Njowa said.local
Share !