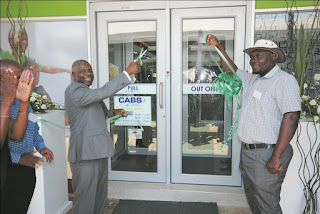 CHIREDZI - Old Mutual last week opened their second Green Zone for Masvingo province in a week, the objective being to create greater convenience for the financial giant's many clients in the sugar growing town.
The Green Zone initiative is one of Old Mutual's biggest customer innovations which is intended to provide convenience to the customers by bringing various Old Mutual subsidiaries under one roof.
Old Mutual chief executive officer (CEO) in Africa, Jonas Mushosho said the company was pleased to bring its one-stop-shop financial services under single management to Chiredzi.
"The Old Mutual family now has many subsidiaries that customers will access at one place taking in CABS, Mutual Insurance Company, Old Mutual Securities and Old Mutual Life Assurance Company," said Mushosho.
He said the launch of the branch in Chiredzi will give Old Mutual a tight communion with sugarcane farmers in the district.
"The investment that we are launching today shows our commitment to Zimbabwe and the community of Chiredzi. It will help ease the way of doing business for the farmers," said Mushosho.
He said the farmers needed a friend on whom they can depend for excellent financial services as those offered by Old Mutual.
"This company together its customers has survived two world wars, many famines and droughts, the unilateral declaration of independence by Ian Smith in 1965 which was quickly followed by UN sanctions and the protracted liberation struggle.
"We have suffered considerable setbacks along the way, particularly the decline of GDP in 1987 up to 2008 but we survived all that including the dollarisation of the economy," said Mushosho.business
Share !