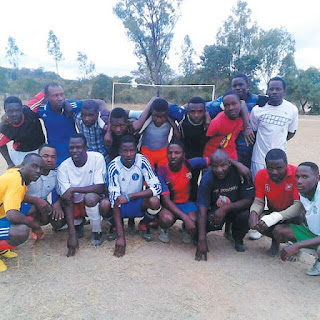 MASVINGO - Rufaro Football Club (FC) won the 'Tourney Aims to Unite Tournament' held at Chiriga Primary School grounds under Chief Serima in Gutu last Friday, October 27.
The event saw 17 rural teams fighting it out for the trophy and prize money but it was Rufaro FC that stole the ultimate glory after putting up a spirited performance which saw them outclassing rivals to reach the finals.
In the quarter finals, Rufaro FC met Chiriga FC and the match ended with a one all draw. Their second quarter final match was against Granby FC whom they thrashed 3-0 to proceed to the semi-finals.
In the semi-finals, Rufaro FC and Chiriga FC outclassed other teams, with Chiriga FC playing against Southdale FC whom they beat 1-0 thanks to Chrispen Musoro; the fast right attacker who scored the goal in extra time.
Another semi-final match was between Rufaro and Norwood FC. The match ended 3-0 in favour of Rufaro FC.
In the finals, Chiriga FC went on to clash with Rufaro FC but they were beaten 2-1, with Tryloving Zimunya scoring a brace which helped the winners to clinch the trophy.
Tournament director Lovemore Mujere said the purpose of the tournament wass to unite people, nurture new talent and improve physical fitness.
"The ultimate objective is to bring in coaches from big teams and other soccer legends like Moses Chunga but those are personalities that are not easy to get hold of. We hope that next season, such legends will come and identify promising talent," Mujere said.
He said they were planning to continue with the tournament next season as they were looking forward for more sponsors to support the initiative.sport
Share !