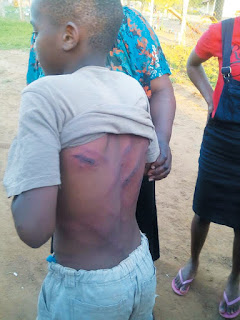 MWENEZI - Fiona Dube, a deputy head at Rutenga Primary School has been implicated in a brutal assault that left a grade five pupil at the school nursing severe scars all over his back.
The vicious assault of Misheck Mazuva occurred on November 19 at Roman Catholic Church's Rutenga cottages where Dube resides.
Dube allegedly teamed up with two other unidentified women and brutalised the child whom they had reportedly accused of stealing a smart phone and US$2 belonging to one of the ladies.
Although efforts to get a comment from Dube were fruitless, school head Tenson Mukapa seemed to confirm the incident.
"Haa manje isu hatishandi nephone kubasa kwedu munotouya kuno kuoffice totaurirana tichionana ….ko phone number dzangu madziwanepi ….plus journalism dzamazuva ano majournalist anorashika kungonyora zvinenge zvakashata chete zvakanaka haanyori," said Mukapa
TellZim News managed to catch up with Mazuva who was visibly in agony, struggling to walk as he went to file a police report at Rutenga Police Station accompanied by his father. He confirmed that he was indeed assaulted by Dube for allegedly stealing a cell phone.
"I was assaulted by Mrs Dube and the other two women who accused me of stealing a smart phone. They beat me with logs but I didn't steal their cell phone," said the sobbing Mazuva.
Sources said after one of the women discovered that her cell phone and money was missing, the two decided to refer the matter to Dube who is the child's teacher.
"The ladies with the missing phone referred the matter to Dube leading to the abuse," said a source.
In March this year, High Court judge Justice David Mangota outlawed corporal punishment against children at schools or at home by teachers, parents and guardians, saying the practice contravenes the country's constitution.local
Share !