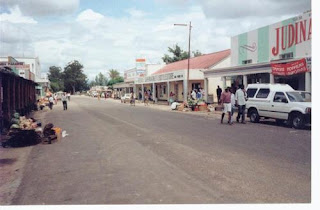 CHIVHU - The solidarity march held in Harare over the weekend to express support for the Zimbabwe Defence Forces (ZDF)'s intervention in the political affairs of the country was a blessing for businesses here as people made a stopover of the transit town.
A number of vendors and retail shops who spoke to this publication were delighted as the solidarity march had attracted people from the southern regions of the country who went on to spent thousands of dollars.
"It was 'business as unusual' because people from Masvingo, Chiredzi and Gweru had their stopovers here. We pray for a similar event so that we can make good money again," said one female vendor who operates at Harare Station.
Another said the business boom was symbolic of better days to come once President Robert Mugabe leaves office.
"The solidarity march was not simply about politics, but was about business too. We recorded brisk business but we don't take that at face value; it was a good sign. Our economy will perform better once the hated dictator is gone," the trader said.
Big supermarkets and food outlets like Pick n Pay, Chicken Inn, Chicken Rite and Spar also experienced a deluge of customers buying food and refreshments.
"We experienced a business boom over the weekend. We have an advantage because this is a transit town so we have an opportunity to sell to travellers," said a grocery shop manager.local
Share !