Zimbabwe will never be governed by ‘traitors’, warns Chiwenga 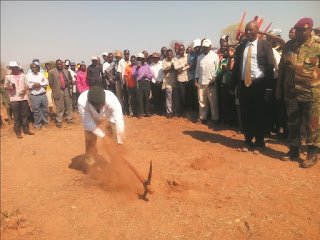 CHIREDZI – Zimbabwe Defence Forces (ZDF) Commander General Constantino Chiwenga has warned that the country will never be governed by 'traitors' for as long as the liberation war generation is still alive.
Gen Chiwenga was speaking in the Gezani communal area where he paid tribute to the late Headman Gezani, Amos Chauke who died on May 5 2017 and his father Dumela Dumezulu, who died in 1992.
He credited the two traditional leaders for their valiant exploits during the liberation struggle, a period when he himself reportedly operated in the area.
In honour of them, ZDF will construct a hospital, repair defunct boreholes and renovate Gezani Primary School which suffered extensive damage caused by Cyclone Dineo.
Addressing members of the community at Makhanani Primary School last week Gen Chiwenga narrated the bitter version of his wartime history and the subsequent bond that developed between him and the Gezani family.
He said many people lost their lives while liberating Zimbabwe from White colonialists during the First and Second Chimurenga.
"We have to remember where we came from and where we are going. Liberation of Zimbabwe came at a cost of many Black lives who fought bravely during the First and Second Chimurenga wars.
"Zimbabwe ndeyechipikirwa yatinofana kuramba takachengetedza tese. Many people perished during Chimurenga. There are many bereaved families who still don't know where their relatives perished and that only gives us strength to jealously guard our nation from being taken over by traitors or White colonialists again," said Gen Chiwenga.
He told the gathering that he had come to fulfil his war time pledge to the Gezani family and community by giving thanks for the protection they gave him during the struggle, starting in 1976.
"We will not forget the good works that you did and that is why we came back. We have to do something tangible for the community as part of our condolences for the losses of the Gezani family," Gen Chiwenga said.
It was not clear who Gen Chiwenga was referring to by the word 'traitors' but in mainstream Zanu PF discourse, the term is used to disparage the opposition, especially the Movement for Democratic Change (MDC) led by Morgan Tsvangirai.local
Share !