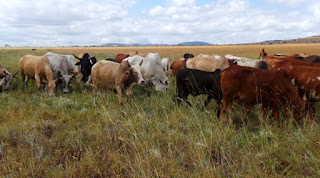 MWENEZI – The family of Gladys Shoko, who was allegedly murdered in South Africa by her husband Austin Mukwazukwazu following an argument over alleged extramarital affairs, has demanded that the Mukwazukwazu family must pay 45 beasts before they can allow their daughter's body to be repatriated for burial, TellZim News has learnt.
Mukwazukwazu, who is originally from Ramubhudha village under Chief Maranda, was residing with his wife in Khayelitsha, Cape Town, when the alleged murder was committed in October.
It is alleged that on the day, Mukwazukwazu found Shoko in possession of some money which she allegedly failed to account for its source. Mukwazukwazu began to accuse Shoko of having an extramarital affair.
He allegedly took a log and struck Shoko all over her head resulting in her falling unconscious. She was later rushed to hospital where she died upon admission.
After committing the offence, Mukwazukwazu fled to Zimbabwe but was arrested last week after a manhunt by Mwenezi police. By the time of going to print, he was due to appear in court.
Although no comment could be obtained from the police, Chief Maranda confirmed the incident saying Mukwazukwazu and the Shoko family had agreed on the repatriation of the body.
"What I am sure is that police managed to arrest Mukwazukwazu. As for the number of cattle that were being charged by Shoko's family, I am not aware but I can confirm that the families have agreed to repatriate the body following weeks of negotiations. I have been informed that the body is on its way home," said Chief Maranda.
However, a close source confirmed that Mukwazukwazu's father, a prominent Mwenezi farmer popularly known as Bope, managed to convince the bereaved family to settle for less.
"The Shoko family were demanding that Bope should pay 45 beasts for the crime. However, Bope negotiated and paid 15 beasts. Besides that, the Bope family raised R18 000 for the corpse to be brought home," said the source.local
Share !