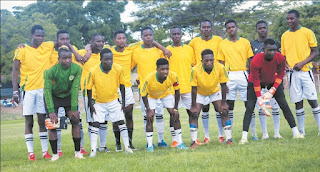 BIKITA – The Bikita Minerals boys' community football team last week put on a determined assault against a similarly stubborn Pamushana Social Club in the finals of the Chief Marozva Trophy to emerge victorious by four goals to one in a tightly contested match played at Lithium Stadium.
In the netball category finals, Gombo humbled Nyika to walk away with the trophy as well as US$200 in prize money.
The tournament was incepted in 2015 as an idea of Chief Marozva, supported by the new Bikita Minerals executive which took over management of the mining company in 2014.
The tournament began as a community project exclusively for teams that fall under the jurisdiction of Chief Marozva (born Phillip Mudhe) but organisers have now expanded it to include teams from the whole Bikita district.
The Bikita Minerals boys' social club got its four goals courtesy of Ezekiel Nyangaswa, Blessed Marwisa Jefta Mabhugu and Hardlife Chitambu.
For their efforts, the champions walked away with the trophy and got US$300 in first prize money.
Speaking before the handover of the prizes, Chief Marozva praised Bikita Minerals for showing a deep passion for the good of the district.
"The previous owners of this mine would always give us a cold shoulder; they disregarded our needs and requests. They were not at all worried about the community but their own profits only.
"I am however happy that Grant Hudson (company director) and his team has brought a new approach altogether and is investing in our people. We must all work to defend Bikita Minerals because it is our company which is giving us jobs and fighting poverty. You can't be our friend if you work against Bikita Minerals," said Chief Marozva.
Speaking at the same occasion, the director in the Ministry of State for Masvingo Provincial Affairs, Kudakwashe Machako urged participants to use the sporting event for greater good.
"We need to take advantage of opportunities such as this to promote downstream industries and create jobs. We should also use the opportunity to fight the spread of HIV and Aids as well as non-communicable diseases. We thank Bikita Minerals for bringing us together in this spirit of togetherness," said Machako.
Other teams that participated in the trophy are Mufuka, Mukondo, Nyika, Mangondo, Bikita South, Domboshava and Bikita East.
In the netball category, Gombo's competitors were Bikita Minerals, Pamushana, Mufuka, Nyika, Gombo, Bikita East, Bikita South and Chesuko.local
Share !