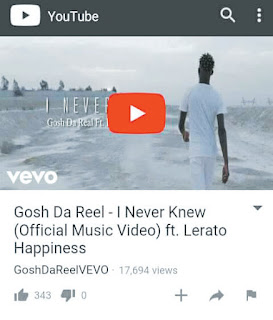 CHIREDZI - A 25-year old singer, Kudakwashe Gosha popularly known as Gosh Da Reel, seems to have struck the right note with his new music video titled 'I never knew' which features South African-based artist Lerato Happiness.
The song is receiving considerable airplay on Soweto TV; DStv channel 251.
The video, which was directed by Karabelo Mphuti (Skyno Films), is making waves in the two countries and on social media platforms like YouTube where it gained 1000 plus views in just a week as from 17 - 24 November.
The Hip-hop chanter started recording in Chiredzi at the age of 17 and he managed to interact with many producers including Dj Bruce in Chiredzi but several of them did not see his talent.
Gosh Da Reel, also known as Lil Gosh, later moved to Welkom, Free State, in South Africa where he is presently based.
In an interview, Gosha said he was sentimentally attached to music so much that he could not help it but move to the neighbouring country after local producers failed to recognise his talent.
"I have been in the music industry for the past eight years and have been told I was wack by many producers but I kept on perfecting my art.
"I am where I am right now not because I am the best but because I don't give up, do not let anyone tell you that you will never make it," said Gosh Da Reel.
Gosh Da Reel was rewarded for being the first Zimbabwean to top the European Music March on a track titled 'Can't stop' which features a British-Nigerian artist and the 2017 IGARA Awards UK finalist Tosin Oyelakin. The track made its debut on Salt FM in UK at number 10
The budding hip-hop star called upon upcoming artists to work hard and invest in their talent so as to survive the vagaries of the music industry.entertainment
Share !