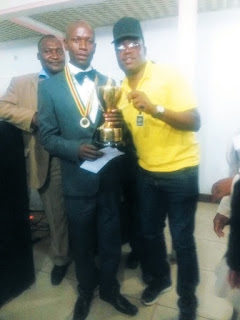 Chikwaikwai celebrates his prize with colleagues

MUTARE - Veteran forward Evans Chikwaikwai was crowned Division One Eastern Region soccer star of the year at this year's leg of the annual awards held at Wise Owl Hotel in Mutare last Saturday.
The Mutare City Rovers FC chief striker was awarded the top gong for putting up a superb performance during the club's spirited campaign this year; remarkable performance that saw the team securing a place in the Premier Soccer League (PSL).
The lanky forward led Rovers' front line and did not disappoint; scoring 14 vital goals for his team during the 2017 season.
Together with Stephen Sibanda, Chikwaikwai was a top goal scorer, both of them with 14 goals for their beloved team.
Before joining Rovers, Chikwaikwai was in the books of Bulawayo-based Njube Sundowns, South Africa's Bidvest Wits and PSL giants Chicken Inn FC.
Farai Mugumwa from Tenax FC was first runner up while Passmore Mupinganjira of Renco Mine FC occupied the second runner up spot.
Mutare City's mentor, Kennedy Kachara and shot stopper Godfrey Chisango were both awarded the best coach award and the goalkeeper of the year award respectively.
Other notable 2017 soccer star finalists were Gift Bhero of Masvingo Pirates, Anelka Chivandire from Prime Rangers and Tinashe Kabanda of Mwenezana FC.
Meanwhile, there is going to be a Diamond Cup for Mutare City, Buffaloes FC, Tenax FC and Masvingo Pirates (formerly Mucheke Pirates); the best four teams of the Eastern Region Division One.
The tourney will be sponsored by Zimbabwe Diamond Mines on December 22 and 23.sport
Share !