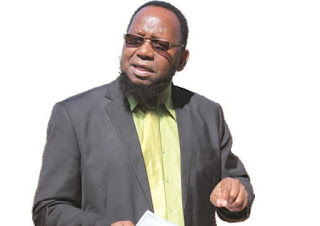 
'He is a typical farm manager not education minister'

01 Dec 2017 - The education fraternity in the country has pleaded with President Emmerson Mnangagwa to do a complete overhaul of the country's education system by weeding off incompetent elements among them former Primary and Secondary Education minister Lazarus Dokora when he appoints his new cabinet.
A number of school heads in Masvingo province as well as teachers' organisations have expressed concern over the manner in which Dokora ran the ministry saying he was a bully and a dictator who did not consult before implementing his inferior policies like the new curriculum.
The new curriculum has received widespread condemnation with President Mnangagwa once questioning the manner of its implementation when he was still vice president earlier this year.
Progressive Teachers' Union of Zimbabwe (PTUZ) president Dr Takavafira Zhou said the whole Dokora approach should just be dispensed.
"It would be unfair to get rid of Dokora only in this whole equation. His former deputy minister and the permanent secretary must go too.
"We do not want to entrust the educational system into the wrong people. Mugabe made a mistake by giving us Dokora and was even deaf when people demonstrated against his leadership.
"President Mnangagwa should know that we need a minister who knows what he or she is doing to better the system, not making it worse and bully teachers around," said Dr Zhou.
In a statement dated November 19, 2017, the Amalgamated Rural Teachers' Union of Zimbabwe (ARTUZ) described Dokoras as the worst minister of education that Zimbabwe has had since 1980.
The statement says Dokora has managed to cling on to power because of bootlicking former President Mugabe and his wife Grace.
"Now that Mugabe is gone, Dokora should go too. Dokora is guilty of many sins in the education sector. He has failed to reign in on ZIMSEC which continues to leak examination papers thereby discrediting the country's examination system.
"Dokora should be thrown out and replaced by capable and competent leaders with a commitment of transforming our education system for the better. In the new Zimbabwe people like Dokora should not be given any ministerial post.
"Dokora is guilty of disastrous formulation and implementation of a new curriculum, introducing Grade 7 examination fees which undermines the right to basic education for all," reads the statement by ARTUZ.
School heads in Masvingo also added their voices condemning Dokora for his poor policies. Two months ago, school heads in Masvingo once described Dokora as a foolish minister who hardly knows anything.
"Our prayer is that we will not get another Dokora as the minister. Dokora was terrible I tell you. No one was happy with him and we hope President Mnangagwa will assign a better candidate to the ministry," said one school head.
"It is disastrous to have someone who wants to prove a point at every turn. Dokora was so obsessed with implementing his new curriculum and turned a blind eye to its flaws. The new minister should do away with the new curriculum and begin consultations first," said another head on conditions of anonymity.
Another head was of the view that Dokora should manage a farm not a whole ministry because he does not have the expertise.
"If you are a leader and you want to impose your way all the time, it means you are clueless. He forced us to march in Harare and chant slogans for former President Mugabe and his wife but now that they are history, he should be history too.
"He should go and manage a farm where he can impose his way on animals because we as humans do not tolerate to be trodden on," said another head.
Efforts to get comment from Dokora were fruitless as his mobile phone was not reachable by the time of going to print.politics
Share !