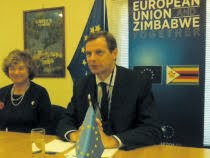 CHIREDZI - The European Union (EU) ambassador to Zimbabwe, Philippe van Damme has called upon government to craft and implement non-partisan policies in the quest for rural development.
The call was made in a speech read on van Damme's behalf by Thomas Opera, his representative at the commissioning of the upgraded 34.5 kilometre Nandi Mkwasine railway line by Minister of Transport and Infrastructural Development, Joramu Gumbo in Chiredzi.
"In 2006 the EU and Zimbabwe agreed on a national sugar strategy. The industry was facing numerous challenges including decline in yields, deteriorating infrastructure, limited access to inputs just to name a few which all resulted in the overall decline of production.
"In this challenging time, the EU committed a total of US$37 million in support of vulnerable small scale sugar producers with overall objective of improving the channel of livelihoods of sugarcane farming in the Lowveld," said van Damme.
He further indicated that the EU is still committed to helping the government improve the livelihoods of the Zimbabwean disadvantaged communities.
"Infrastructure alone is insufficient to ensure social, environmental and economically sustainable rural development. Predictable policies in key areas such as indigenisation and access to land should be incredible and non-partisan and based on agro-economic and social criteria which safeguards long done sustainability in managing and conserving natural resources.
"EU and Zimbabwean government are currently working on a comprehensive programme to support communities surrounding the Save Valley Conservancy in developing forward looking solutions to maximise the benefits from agriculture and wildlife," added van Damme.
THE National Railways of Zimbabwe (NRZ), in partnership with the government and the European Union, refurbished the Nandi-Mkwasine railway line at a cost of more than US$10 million.
According to NRZ, the refurbishment exercise saw the upgrading of the track from 30kg/metre track to a heavier 40kg/metre track and the replacement of steel sleepers with 34 000 concrete sleepers.local
Share !