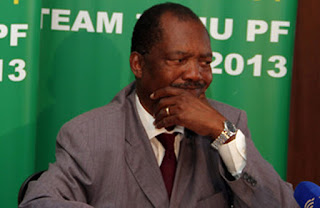 GWERU – Rugare Gumbo made a surprise appearance at the Midlands State University (MSU)'s 17th graduation ceremony, sat at the high table reserved for VIPs and later indicated that he was amenable to rejoining Zanu PF.
Gumbo, who was the Zanu PF secretary for information, was fired from the party in 2014 during the Gamatox purges that also claimed the scalps of other bigwigs like Joice Mujuru, Didymus Mutasa and Nicholas Goche.
He has been associated with opposition politics ever since, having teamed up Mujuru and others to form Zimbabwe People First (ZimPF) which later broke up to pieces some months ago.
In an interview with TellZim News, Gumbo said he had 'no problem working in solidarity' with President Emmerson Mnangagwa's government now that Robert Mugabe is gone.
"I think it's proper to be working in solidarity with President Mnangagwa because there is no bad blood between us. Those who chased us out are no longer there so I attended this ceremony as a way of making fruitful interactions with people that I hold no grudge against," Gumbo said.
He also made it clear he was 'making consultations' with people he has been working with in the opposition in order to know if they are comfortable with him moving back to Zanu PF.
"I can't really say I have re-joined Zanu PF but we are currently making consultations with our supporters on the rightful move to make. Politics is about people and when people speak, nothing will stop me from rejoining Zanu PF. I will also definitely come back to you with our position once we are done with consultations," Gumbo said.
Many former party heavyweights expelled in 2014 have been making groveling statements about Mnangagwa, with Kudakwashe Basikiti and Claudius Makova announcing last week that they were going back to the ruling party.local
Share !