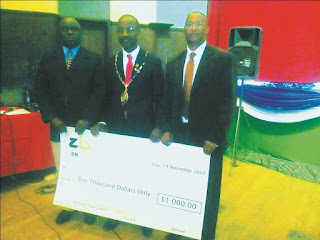 City of Masvingo Town Clerk Adolf Gusha was last week honoured alongside many other employees for the long time they have spent serving the council.
An award ceremony was held last week at the Civic Centre Hall in honour of employees who were going on retirement as well as those who have served the council with distinction for periods ranging from 10 to 43 years.
Gusha has worked in local governance since 1983 when he joined Shurugwi Rural District Council after completing his university education the previous year.
From Shurugwi, he joined the local governance ministry before moving to Masvingo city council in 1987 where he started as the deputy housing director. He then rose through the ranks until he was appointed substantive Town Clerk in 2004.
As the council's most senior manager, he has overseen the development of the town which later gained city status thanks to his and many other people's efforts.
Gusha worked with many councils including that of the late mayors; Alderman Francis Aphiri, Engineer Alois Chaimiti, Femius Chakabuda and the current mayor Hubert Fidze.
During these times, City of Masvingo won many awards for its efforts to improve service delivery especially with regards to the provision of safe water for domestic use and up until today, the city boasts probably the safest drinking water in all urban areas of the country.
Gusha was there when the council was rendered 'almost destitute' in 2013 when council employees sued and managed to get almost all of the municipal service vehicles attached over unpaid wages amounting to US3.5 million.
The council later waged a protracted legal battle which it latter won and managed to recover all the vehicles last month. Meanwhile, council had already replenished its fleet with new vehicles bought through such controversial yet successful schemes like the roads levy.
In October 2016, Gusha scooped the prestigious Best CEO of the Year award (Second Runner-up) at the Megafest Business Awards held in Bulawayo.local
Share !