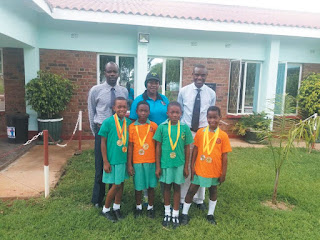 MASVINGO – Helen McGhie Primary has promised to increase support for the development of tennis in the wake of the school's stunning performance in the inaugural Mordecai Tournament.
The school's players bagged a whopping five gold and two silver medals in a tournament which attracted many other primary schools with immensely talented competitors.
Most outstanding was Tinotenda Chipfakacha, a Grade 4 pupil who competed in the Green Ball category and won two gold medals.
Other Helen McGhie pupils who competed and won medals are Edna Mhango (Grade 5) who also played in the Green Ball category and scooped gold, Anenyasha Mukwenje (Grade 3, Red Ball) gold and silver as well as Rachel Mhizha (Grade 4, Orange Ball) gold and silver.
Speaking to TellZim News Helen McGhie Primary School head, Sheila Deve said the results had a motivational effect on the school such that more support will be given to pupils to develop their talent.
"As a school, we are excited by the performance of our children at the Mordecai Tournament. It has served to make us notice the immense talent and potential that pupils at Helen McGhie Primary possess. We pledge to give more attention to the needs of our children for the sake of developing their tennis talent," said Deve.
On his part, School Development Committee (SDC) chairperson, Tinashe Mutema praised the children who participated in the tournament and called for better training programmes.
"Our school emphasises greater participation of children in all sporting activities because that is good for both their psychological and physiological development. We therefore need to support the exploits of our children in sports so that we can have more of such medals," said Mutema.
The Mordecai Tournament, which is recognised by Tennis Zimbabwe, is a brainchild of the Simon and Melody Mhizha who are on a drive to promote tennis development among children.
Other primary schools that took part in the inaugural leg of the tournament include Dikwindi, Shakashe, Kyle Preparatory, Victoria Junior and Francis Aphiri.
Meanwhile, Helen McGhie Primary School has announced that it has sought the services of Privy Fanisai, one of the most renowned tennis coaches in Masvingo province.local
Share !