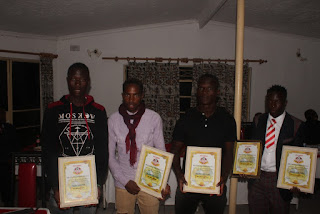 Masvingo Pirates Football Club (FC) formerly known as Mucheke Pirates FC 'Dzinochekwa Baba' recently rewarded players who excelled during the recently-ended 2017 Zimbabwe Football Association (Zifa) Eastern Region Division One season.
The football club held a speech and awards giving ceremony at Kyle Lake View Holiday Resort near Lake Mutirikwi.
Masvingo Pirates FC administration decided to honour every player with prize money but also awarded a select few with extra prizes for being outstanding in different categories.
Sebastian Tuboyi received US$70 for being the most disciplined player while top goal scorer Wellington Ncube received US$60 in cash.
Taurai Madziise was named most improved player and he walked away with US$60 prize money while Takunda Mazhambe won US$70 for being the most consistent player.
Alvin Bhero got for himself US$50 for being the 'player's player' while Assan Kachepa was given US$100 for being the soccer star of the year.
Zifa Eastern Region administrator Tadius Machawira, who was the guest of honour, encouraged the team to work harder come next season so that the community can have a team in the Premier Soccer League (PSL).
He encouraged players to stay with the team and hone their skills with it rather than migrate endlessly.
"I would like to encourage players to try by all means to stay at one club. That will help you a lot in achieving your goals and mature in football. You will then help the team to be promoted into the premier league," Machawira said.
Masvingo pirates completed the 2017 season at number four after facing a tough challenge towards the end of the competition.
Team coach Ezekiel Mutoda thanked the players for their performance throughout the season and pledged to work for better performance next season.sport
Share !