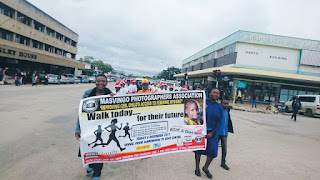 MASVINGO – Masvingo Photographers Association (MPA) in partnership with Zimbabwe Performing Arts for Schools Trust (Zimpast) last week organised a charity walk from Mangwandi Cemetery to the Civic Centre in order to raise money to buy sanitary wear for disadvantaged girls.
MPA secretary general manager Charles Maregere said the idea was to help improve access to sanitary wear by girls in children shelters.
"People contributed some few dollars to participate in the walk. All the money will be channeled towards helping the underprivileged girls in orphanages in Masvingo," said Maregere.
Zimpast director and founder Tichamupei Nyandoro said the money raised will buy sanitary pads so as to help girls in orphanages to have a more enjoyable festive season.
"As we approach the festive season, many people donate groceries, clothing and other basics. We have decided to complement that by buying those necessities," said Nyandoro.
Deputy director in the Provincial Affairs ministry Lovemore Chisirimunhu, who was the guest of honour, said national resources should be used to improve the wellbeing of the girl child.
He said it was the duty of all stakeholders especially those in the public health sector to work for the improvement of access to sanitary wear by girls in disadvantaged communities.
"We call for collaboration of all stakeholders in the public health sector in order to carry out robust community-based health education. Our target should be both in school and out of school youths," Chisirimunhu said.
The march also served to raise awareness on HIV and Aids, gender based violence and domestic violence.
Small business people, members of professional bodies, non-governmental organisations and Masvingo Christian College pupils also joined the March.
In 2016, MPA and Zimpast organised a similar event where they celebrated women who are in largely male-dominated trades.local
Share !