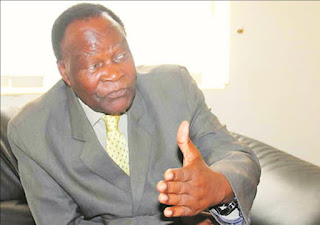 MASVINGO - The newly-appointed Minister of State for Masvingo Provincial Affairs Josaya Hungwe stunned party members during a Provincial Coordinating Committee (PCC) meeting when he revealed that Team Lacoste faction had to use the army after they had been outsmarted by Generation 40 (G40) faction. Hungwe added that the defeat by G40 was a clear indication that former president Robert Mugabe was smarter than his successor President Emmerson Mnangagwa.
The Masvingo Godfather revealed that the reason why the military 'stepped in' to elbow out Mugabe and the G40 faction was because Mnangagwa and Lacoste faction had completely failed.
Addressing a charged PCC last Sunday at the Show Grounds, Hungwe, who introduced a new party slogan 'Pamberi neNgwena', equated Mnangagwa to Biblical Nehemiah who fled from his country and later sought permission to return to his homeland to rebuild what was broken.
Hungwe said it was going to be impossible for Mnangagwa to remove former Higher and Tertiary Education minister Professor Jonathan Moyo and other top G40 ring leaders adding that only army commander General Constantino Chiwenga had the power to remove the former President and the G40 cabal.
Hungwe further equated Zanu PF to Jerusalem which was burnt to the ground by King Nebuchadnezzar (G40) while Nehemiah (juxtaposed to President Emmerson Mnangagwa) helped the Israelites (Lacoste) to rebuild the walls of Jerusalem with soldiers on guard.
"Jerusalem had been burnt down and Nehemiah was so sad about it. He wished to go back and rebuild the walls of Jerusalem so that the Israelites would be safe. Nehemiah was asked what his master King Artaxerxes could help with and he asked to be let go and rebuild the Walls of Jerusalem.
"Asi Mambo akaziva kuti kune vadzivisi vanogona kutadzisa basa rekuvaka akabva apa Nehemiah masoja ekuti azorwisa wavengi kana wouya (But the King knew that the Egyptians would come and attack the Israelites and he gave Nehemiah an army to protect the people while they rebuild the Walls)," said Hungwe.
"President Mnangagwa with the help of the army managed to dislodge the enemy which has been shutting us out all along. With the help of Gen Chiwenga, all the enemies retreated and we are going to rebuild the Walls of Jerusalem.
"Our President Mnangagwa said there will be gnashing of teeth in the end. Gen Chiwenga varimo muBhaibheri ndivo vaya vanopindira kana vanhu voramba nezvinhu zvevanhu (Gen Chiwenga is there in the Bible and he fights for the people)," said Hungwe.
Hungwe openly hinted that Zanu PF will not hesitate to use soldiers during the 2018 harmonised elections saying it was common that Kings in the Bible would always use soldiers for their convenience.
"In the Bible, the Kings ruled with the army on their side. Saka patinoenda ku2018 elections musasiya soja. (Zanu PF) Chairman, soja apa imi mberi. (When we campaign in 2018, do not leave the army. We will move side by side with the military)," said Hungwe.
The meeting became intense when the central committee member Rtd Brig-Gen Livingstone Chineka wept and trembled in anger over what he said was a distressing onslaught by the now defeated G40 cabal. He argued that forgiving members and accepting them back into party structures without through vetting would not be good for Zanu PF.
"We should address the problem not symptoms. We do not want to walk with people who will cause problems along the way.
"We need leaders we can bank on not those with double standards. These people who turned on us before, what guarantee do we have that they will not turn again. We need to be very careful on whom to trust now.
"We were called all sorts of names because of these people and we cannot leave this rot unattended. They should all come forward and confess their double standards and not to shelter them as if nothing happened," said Rtd Brig-Gen Chineka before breaking into tears.
Provincial chairperson Ezra Chadzamira urged members to follow proper party channels and not just to expel members for having links with the G40. He said the obvious people who will face the chop at the upcoming congress are Walter Mzembi, Dr Paul Chimedza, Daniel Shumba and Jeppy Jaboon.top news
Share !