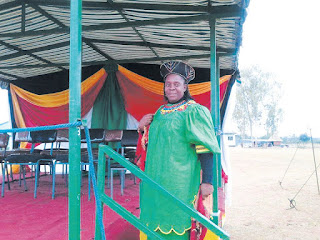 ZAKA – Sarah Munemo, a renowned entrepreneur, says multi-tasking defines every successful woman because one has to balance all tasks that come with the responsibility of womanhood.
Munemo, who owns Phinies Motel, one of the best hospitality spots in Jerera, says being in business does not relieve a woman of other duties that are expected of her.
"I am a business woman but that does not take away my other duties as a wife, mother, grandmother and as a daughter-in-law. I don't need to shed any of those responsibilities to be successful in business. I have to balance all the duties," Munemo said in an interview with TellZim News.
She acknowledges that being a businesswoman excelling in a male-dominated sector comes with immense challenges that one needs to overcome.
"You are called all sorts of names; sometimes by relatives and sometimes by competitors who haven't accepted that things are changing and women are working themselves up into every male-dominated industry. If you are focused as a person, you got to ignore all that and keep moving forward," said Munemo.
The soft-spoken Munemo has defied the odds to become a successful farmer, entrepreneur and community leader within Zaka and beyond.
She was born at Morgenster Mission and attended Chikarudzo Primary School before proceeding to Morgenster Secondary School where she completed her secondary education in 1985.
From there, she trained as a teacher but later left to pursue a secretarial course at Foundation Technical College. She also did a computers course at Bulawayo Polytechnic.
In 1994, she did Foundation in Business studies and established Safra (Pvt) Ltd in the same year. Safra Pvt Ltd is the holding company under whose stable Phinies Motel and Munemo's other investments fall.
In 2012, Munemo opened Pecom Academy, a private high school which is credited for restoring the hopes of pupils who would have failed to obtain good marks in their first exam sittings. The college also admits older pupils and young mothers who normally find it difficult to be admitted into other schools.
It is however, Phinies Motel, situated at Jerera growth point, which rises as a flagship of all her investments. The motel offers quality conference facilities as well as overnight accommodation for people in different income brackets.
Excellent catering services with a traditional touch are what one can expect at the motel which, since its opening in 2012, has grown to be a favourite venue for top-of-the range weddings, parties and workshops.
Munemo also started Saru Pro Chickens in 2015 and went on to form Saru - Pro Development Trust, an organisations which helps rural women to get into indigenous poultry and eggs production. The organisation has so far uplifted hundreds of rural women by getting them into the 'road-runner' chicken and egg production business.
She won the 2015/16 SMEs Best Rural Business Person of the Year and was a 2016 Zimbabwe National Chamber of Commerce (ZNCC) AWECA award winner.
She was certified Professional Women Entrepreneur Executive Proweb, Virgine Unite USA and was certified Brilliant Entrepreneur in the Netherlands in 2015 and 2016 respectively.
In 2016, she was also certified Professional Entrepreneur Mentor Proweb-Virgine in USA before being certified SanBio/NEPAD Participant (Southern Africa Network for Biosciences/New Economic Partners for Africa Development).
She is Masvingo province and Zaka district secretary for the Zimbabwe Chamber of SMEs and chairperson of the Federation of National Associations of Women in Business in Eastern and Southern Africa (FEMCOM).
To add yet another feather onto her cap, Munemo is an executive member of Leading Women of Africa, a pan-African organisation based in Cape Town, South Africa. The organisation advocates for women inclusion in influential positions.
Besides being a provincial member for Proweb and a member of Sanbiobiz - SA Innovation, Munemo is also a committee member for the Confederation of Zimbabwe Industry (CZI) and is the chairperson of Women of Substance, a women empowerment advocacy group.
With such responsibilities on the shoulders, any person of ordinary capabilities would find the pressure too much to bear but due to her boldness and ability to manage time, Munemo has managed to navigate the waters with remarkable ease.
"The boldness I inherited from my upbringing gives me the strength to move on. I also draw my strength from the business trainings I have received over the years as well as from a very wide network which has given me access to vital information," said Munemo, who also credits her good interactive skills for her phenomenal growth.local
Share !