Mutare council out to restore ‘sanity’ 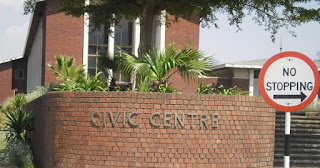 MUTARE - City of Mutare has partnered with the Zimbabwe Republic Police (ZRP) and Zimbabwe National Army (ZNA) in a massive cleanup campaign aimed at removing illegal vendors and flushing out touts from hotspots in the CBD and Sakubva high density suburb.
Dubbed 'Operation Restore Sanity', the exercise began early this week and illegal vendors, who hitherto had seemed to have permanently settled on pavements in the CBD and around Sakubva Bus Terminus, were seen packing their wares and moving back to designated areas.
Speaking to TellZim News, Mutare City Council spokesperson Spren Mutiwi said vendors and touts had been given a two-day ultimatum to comply as the city wanted 'to reclaim its pride as the cleanest city in Zimbabwe'.
"The operation has started today (Monday) and illegal vendors have been given a two-day ultimatum to move out of town and revert to their designated sites.
"This is an aggressive operation that will bring order and sanity and we want to reclaim our status as the cleanest city in Zimbabwe," said Mutiwi.
He warned public transport operators to desist from engaging services of touts.
"We want the rank marshal and tout menace to disappear from Mutare. All commuter and long-distance bus operators should desist from engaging touts. It is disturbing to note that a number of people have lost valuable items through theft due to the influx of touts at various bus terminus," said Mutiwi.
Members of the public who spoke to Tellzim News welcomed the operation urging the council to adopt a zero tolerance especially to touts.
"We could no longer travel in peace because of touts. They would harass and sometimes steal from people. We hope this will continue in the CBD and the main rank in Sakubva," said Takunda Mudzimiri.local
Share !