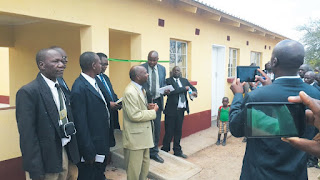 CHIREDZI – The Seventh Day Adventist (SDA) has built a clinic in Chief Masivamele's area, Ward 8 in Chiredzi East as part of the church's efforts to spread access to basic health services to the marginalised.
The clinic was built in a very short period of time and has already been handed over to the community.
The project was initiated by the community with assistance from SDA which took up the task and funded the construction of the ward's only clinic.
Speaking at the official opening of the clinic, Chiredzi East Member of Parliament Denford Masiya applauded the church for the work which he said was the best health services development to happen in the constituency in recent times.
"The SDA church involved me when they began here and today they have invited me to this occasion now that the structure is finished. I want to thank them for the great work they have done in Chiredzi East especially in Ward 8 where there are enormous health services delivery challenges," said Masiya.
He also said it was the duty of churches to support government programmes especially in health and education, as the SDA was doing.
SDA Central Zimbabwe Conference president Pastor Jothamu Manyakara applauded the Chiredzi Rural district Council for expediting arrangements for the project.
"I am humbled by the cooperation of this community's leadership, both the council and traditional leaders, they were very much cooperative and worked smoothly with us.
"I also want to say that this structure was made possible through the maximum involvement of SDA church members in the whole conference. It is through their financial and material contributions that this project is a success," said Manyakara.
He said the church intended to drill a borehole at the clinic in the coming days.
"We are constructing a state of the art boarding school very close to this place, with two blocks already finished. If we did manage to build this clinic, by the grace of God we will complete the boarding school," said Manyakara.local
Share !