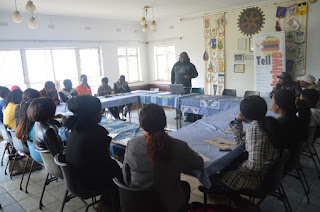 MASVINGO - TellZim last Tuesday conducted a workshop for citizen journalists at the Civic Centre where participants were equipped with skills on election reporting.
The workshop was facilitated by John Mokwetsi who is a veteran Journalist and the online editor at Alpha Media Holdings (AMH).
Mokwetsi encouraged local citizen journalists to take advantage of technology and social media platforms to tell stories that matter in their areas.
"People outside Masvingo depend on citizen journalists for information, so take advantage of you phones to tell stories in your locations. There is no one who can tell the stories that happen in your location better than you," Mokwetsi said.
He encouraged accurate reporting, saying citizen journalism holds a lot of potential if practitioners do the job as per expectation.
Mwenezi East Member of Parliament (MP) Joosbi Omar, in a speech read on his behalf by his constituency coordinator Knocks Mutsambwa, said citizen journalists were instrumental in creating dialogue between leaders and the public for the sake of development.
"WhatsApp groups, for example, are helping to relay information throughout the Mwenezi East community. Such platforms are being used to mobilise volunteers to refurbish schools, clinics and to sink boreholes in the constituency," said Omar.
He also said citizen journalists are helping to report emergency cases as well as to highlight areas that need the attention of leaders.local
Share !