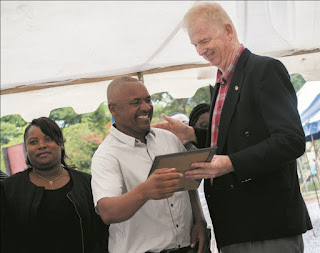 Bikita Minerals director Grant Hudson (right) hands over a prize to Mike Mushava who has worked for the company for 20 years.

BIKITA – Bikita Minerals was last week praised for its commitment to the communal good after a weekend which saw the company spending enormous resources to improve the welfare of its employees as well as that of the surrounding community.
Last Friday, the lithium producer commissioned a new Early Childhood Development Centre (ECD) which was built in response to the lack of such facilities in the mining community and beyond.
The development means that over 90 children of mine workers and people in surrounding communities who have been learning in a recreational hall – a place that lacked the requisite equipment and aura – will now enjoy a more comfortable learning environment.
Graduates from the centre will be able to move into the adjacent Bikita Minerals Primary School which has an enrolment of over 700 pupils, the vast majority of whom are children from surrounding communities.
The new centre boasts state-of-the-art road traffic simulations that are designed to give children an early introduction to rules of the road. The centre also has quality furniture best suited for the needs of children.
Masvingo Provincial Education Director (PED) Zedius Chitiga attended the official opening of the ECD centre as guest of honour.
On Saturday, the company held its Long Service Awards ceremony for year 2017, an annual event that has become representative of probably the most benevolent side of a company that is sweating it out in a difficult economic environment.
As alluded to by their very name, the awards are meant to reward loyalty; to recognise the discipline of employees who have served the company for a period of 10 up to 30 years and beyond.
Speaking at the event, Bikita Minerals director Grant Hudson said the awards were a recognition of the dedication with which a great deal of workers are serving the company.
"It is with pleasure that we have again gathered for the Long Service Awards; themselves a realisation that commitment and effort have to be rewarded accordingly. A few years back, we said we must all work hard to improve production for us to have more resources at our disposal. I am glad everybody is working towards that one common goal," said Hudson.
On the same note, Bikita Minerals personnel manager Munyaradzi Mapeture said it was pleasing that the company was striking a balance between its commercial interests and its moral responsibility.
"The company is fulfilling all its promises to its employees as well as the wider community. The awards will continue and we hope they will get better. I would like to encourage our employees to keep on giving their best so that the reward can be better in the future," said Mapeture.
The ceremony saw over 40 employees walking away with prizes that included electrical stoves and other household appliances.
The second and third day of the eventful weekend saw nine football and eight netball teams drawn from the whole Bikita district tussling it out for the coveted Chief Marozva Trophy.
The tournament was graced by many dignified people including incumbent Chief Marozva Phillip Mudhe and the director in the Ministry of State for Masvingo Provincial Affairs, Kudakwashe Machako.
The tournament, which is the brainchild of Chief Marozva, brings together community teams from the district for a trophy and cash prizes sponsored by Bikita Minerals.local
Share !