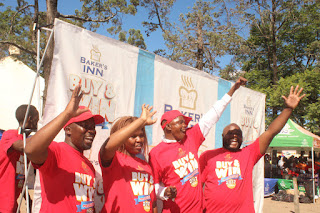 Wide smiles at the Baker's Inn Buy and Win draw

MASVINGO – A lucky couple that has never missed a chance to participate in the Baker's Inn Buy and Win is now driving good cars courtesy of two grant draws.
Jerrifanos Musara (48), a teacher at Ndarama High School, last Saturday won an elegant Mercedes Benz C 200 and at the third Bakers Inn Grand Draw.
His girlfriend, Rejoice Mandishona won a Honda Fit in the 2015 edition of the draw and she was there when her other half received the keys for his own lucky win.
An excited Musara said the only secret behind winning was participating and filling as many entry forms as possible.
"I am so much into betting and I have also tried lotto. You can win if you compete and I am very happy that I have won the car because I expected to win something though I did not know I will walk away with the grand prize," Musara said.
On her part, Mandishona was the winner of the 2015 grant prize of a Honda Fit and was there last week when Musara won not only his own car but a television set as well.
"I am very excited that my boyfriend has won a Benz. I could not believe it because I was not expecting anything like this and I had already rejoiced when he won the television.
"We are so grateful to Bakers Inn because our lives have been changed. I can't even explain how happy I am. We are continuing to support them," said Mandishona.
If anything, the surprising coincident proved that even the least likely or least expected things can happen as there is a chance for anybody to win in a fair and transparent draw like the Baker's Inn  Buy and Win draw.
Baker's Inn Masvingo area manager, Admire Vhoko encouraged all customers not to miss a chance in all future draws as every participant has a chance of winning.
"With Bakers Inn, you will always win. Participation and competition is fair and transparent. We note the rare case of the couple and we would like to congratulate all our lucky winners," Vhoko said.business
Share !