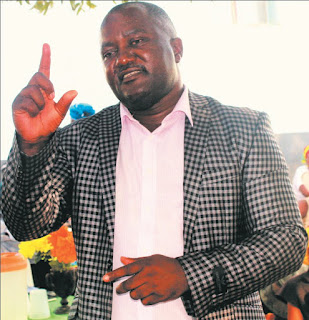 12 Jan 2018 - CHIREDZI - Zanu PF Masvingo provincial chairman Ezra Chadzamira and his chairperson clashed last week over what to do with Members of Parliament (MPs) who are identified as having been with the G40 faction.
At an inter-district meeting, Baloyi said Chiredzi had resolved to expel all MPs who had ties to the defeated faction but Chadzamira strongly disagreed, saying the party should move forward in unity. The targeted MPs are Darlington Chiwa, Denford Masiya, Robert Mukwena and Kalisto Gwanetsa.
"Chiredzi district resolved that I should present to you comrade chairman that all MPs be expelled from the party due to their links to the G40 cabal. There are youths who are complaining that they are victims of a corrupt stands scheme involving the MPs," said Baloyi.
Chadzamira, however, exonerated the MPs saying factional differences must now be put aside.
"We no longer have factions in Zanu PF. I need to encourage you to unite as Chiredzi leadership in order to build our district and the country. We all know that the G40 once existed and some are still in existence but let's all unite over the same cause. Takadzinga vatakadzinga kukasara vatakasara navo and I am not saying they are perfect, some are still conducting secret G40 meetings," said Chadzamira.
He warned against mudslinging, unrestrained jostling for positions and candidates imposition.
"We are not going to impose candidates this year and the people will elect whoever they want. Hakuna asingadi kupinda mumaconstituencies atinawo even kwangu varikowo vari kutodawo but let us all unite pamwe chete and stop this thing," he said.
Baloyi reportedly want Gwanetsa expelled so that he will be able to take his Chiredzi South constituency with little opposition while his ally Ronald Ndava wants Mukwena's Chiredzi North. Another ally, Jevas Masosota is interested in Masiya's Chiredzi East.
Of all the MPs from Masvingo who stand accused of having been with G40, only Paul Chimedza, Walter Mzembi, Daniel Shumba and Jeppy Jaboon were expelled and recalled from parliament.politics
Share !