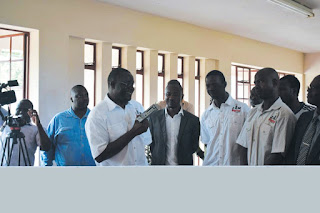 CHIPINGE - The two districts of Chipinge and Chimanimani this week joined parts of the country that have been connected to digital television signals under the country's national digitisation programme.
The move will see television users migrate from analogue broadcasting to digital terrestrial services.
Last week Thursday, a high-powered delegation comprising the permanent secretary in Ministry of Information and Broadcasting services George Charamba, Broadcasting Authority of Zimbabwe (BAZ) CEO Engineer Obert Muganyura and Transmedia engineers were in Manicaland province where they installed the Gwindingwi transmitter in Chimanimani district.
The transmitter will provide digital services to Chipinge, Chimanimani and parts of the Bikita districts.
Speaking during the tour, Charamba said the TV digital signals was now ready in Chipinge, Chimanimani and parts of Masvingo province.
"The Chipinge and Chimanimani districts are now connected to digital TV signals after the Gwindingwi transmitter in Chimanimani was connected end December.
"The people in these districts can tune to digital services once we disburse the set boxes which we are going to distribute soon.
"We will tender for set boxes and suppliers have already told us they need only a period not less than 3 months to finish connecting these set boxes to our digital services.
"The people should not worry about the prices of the set boxes because we probably will give them free of charge. The real money emanate from selling the content not selling set top boxes.
"We are targeting 100 000 set boxes in the first phase," Charamba said.
He said the digitisation programme was good news for Chipinge and Chimanimani people as they were not receiving good transmission since independence.
"The beauty of Chipinge and Chimanimani districts was always a curse on TV transmission due to its terrain and mountainous scenes. Now we can promise that we will make sure that transmission in this area will not be interrupted as we will provide good equipment that reach every corner.
"The transmitter is being boosted by a 3 000 litre generator on standby for use if power outages may occur.
"The installation of transmitters means the quality of TV has improved and more content should be provided which can also create employment for locals. After finishing TV digitalisation we will shift our attention to radio. We are always wanted to prioritise radio because it is the medium for Africa," said Charamba.
Muganyura said those with morden digital televisions sets should not bother buying set top boxes.
Presenting 2018 budget Minister of Finance and Economic development Mr Patrick Chinamasa allocated US$26,6m for digitalisation programmes.local
Share !