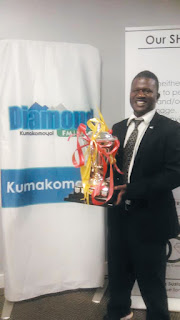 MUTARE - The draw for the Diamond Cup was held on Tuesday, January 23, at Holiday Inn Mutare in preparation for the games that will commence on January 27 at Sakubva Stadium.
The event was graced by Kenneth Mugarisanwa, who is the director in the office of the Minister of State for Manicaland Provincial Affairs.
Mugarisanwa showed appreciation to the Zimbabwe Consolidated Diamond Company (ZCDC) for bankrolling this tournament.
Masvingo Pirates 'Dzinochekwa Baba' will entertain Surrey FC in the first semi-final to be played at Sakubva Stadium at 12:30 hrs on Saturday January 27.
The second semi-final will be played at 14:30 hrs on January 28 with Tenax FC enjoying a date against Buffalo FC at the same venue.
The winners of these semi-finals will square off against each other on the following day.
The overall winners will walk away US$3000 richer while the first and second runner ups will be awarded US$1500 and US$1300 respectively.
Speaking to TellZim News on Wednesday, Masvingo Pirates spokesperson Godfrey Mtimba said the team was very much prepared to play and to win the trophy.
"We are ready to go and bring the cup. We want to make sure that the province celebrates our win especially after failing in the Zifa Eastern Region division one. Our objective is to bring the cup home. We are confident that we will win the cup which will boost our confidence as we go into the new season in which we are aiming to take top honours in our second attempt," Mtimba said.
ZCDC chief executive officer (CEO), Rob De Pretto assured the Zifa Eastern Region that the tournament will henceforth become an annual event.
He handed over the floating trophy, two football kits and a soccer ball to each of the four participating clubs.sport
Share !