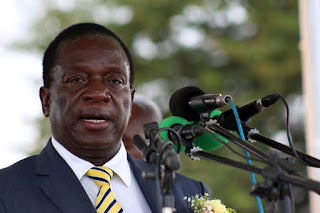 The once powerful Zanu PF Masvingo provincial women's league boss Veronica Makonese, who fell from grace with the decimation of the G40 faction at the hands of the military-led Operation Restore Legacy, last Sunday successfully refused to be ejected from a provincial coordinating committee (PCC) meeting, arguing it was her right, as a party member, to attend.
A passionate Zanu PF follower, Makonese – who has however already been kicked from her post – shocked even her most determined detractors when she showed up at the meeting and resolutely refused to leave.
She bulldozed her way into an earlier meeting of the provincial executive committee (PEC) but was expelled.
The elderly Makonese then sat at the doorstep waiting for the PCC meeting, all the while taunting her tormentors and challenging them to give her a fair trial instead of banishing her, much to the embarrassment of senior party officials present.
"Ndiri munhuwo. Hamufaniri kundiita zvamuri kundiita izvi. Zanu PF musangano wedu tose. Musavenga munhu vengai mhosva. Kana ndine mhosva nditongei asi mu Zanu PF handidzingwi. (I am human so you should treat me with respect. Zanu PF is our party and if I have committed an offense I accept discipline but not to be dragged out of the party)," protested Makonese.
After the PEC, Makonese found her way into the PCC where provincial chairperson Ezra Chadzamira asked her to leave after the customary request for all non-PCC members to leave. Makonese however ignored all the calls to leave as well as attempts by the wider floor to sing and shout her out.
She remained seated and a security team was send to kick here out. The security team had a torrid time as Makonese stood her ground and refused to leave.
She went and bowed in front of Josaya Hungwe who did nothing to save her and advised her to comply.
Realising that the window was closing, Makonese sat on the floor and the security team tried to drag her but later gave up and allowed to stay.
She danced avidly to Kutonga Kwaro whenever it was played, and energetically joined in slogans praising President Emmerson Mnangagwa whose faction she bitterly fought before the military intervention.
In his speech later on, national political commissar Rtd Lt Gen Engelbert Rugeje said he was out to mend broken fences and forgive but will not forget.
"We will forgive but we will not forget. My job is to recruit more people into Zanu PF and not to expel. The people from Masvingo said 'kumagumo kune nyaya' and now that we have reached the end, some people have been caught on the wrong side and they cry foul.
"No one is bigger than the party and if the party says do this, you should listen because putting up a challenge will not help," Rugeje.topnews
Share !