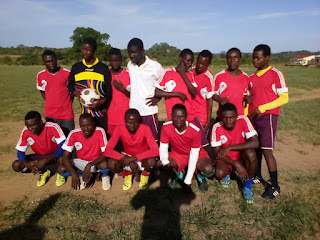 ZAKA - In the deepest corners of the district lies a community with a promising team which is determined to take local football to great heights.
FC Mutonhori Troopers, a team made up of a number of youths brought together by passion, talent and determination, was formed last year in Mutonhori area under Chief Nyakunhuwa.
The team, which is jointly coached by Tungamirai Tivafukidze and Stanly Masara, is managed by Chief Kuzourava and Munyaradzi Chagweda, with A. Munodzana as its chairperson.
Tivafukidze told TellZim News that the team aimed to give young people something to put their minds on as a way of fighting social vice.
He added that the team was put together to instil discipline among the youth as well as to bring an active sporting community by identifying and nurturing young talent.
"Our motive is to create an enabling environment for youths to be morally and culturally upright. We would also like to see the Mutonhori/Harava community coming together through sport. We know that we have so much talent to grow here," said Tivafukidze.
He added that the team was looking forward to take part in big games and the Premier Soccer League (PSL).
The team so far has participated in a number of competitions such as the Pinda muSmart tournament, Chief Nyakunhuwa Trophy, and Zaka Division 3 league where they found themselves playing well to a point of taking some first prizes.
Masara applauded the performance of the team saying they had started on a high note and promised that only the sky will be the limit for FC Mutonhori Troopers.
The team does not have a sponsor at the moment and has appealed to those with the means to partner them. Members of the team are using their own meagre resources to transport themselves and buy the necessities of the game.
Class Kuzourava, Chagweda Munyaradzi, Mazivazvose Nyasha and team captain Guffi Makufa are some of the FC Mutonhori Troopers players.sport