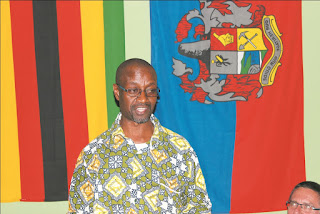 MASVINGO – City of Masvingo mayor, Cllr Hubert Fidze has expressed outrage at reports of abuse of resources allocated to old people's homes, children's homes and other charities benefitting from the Mayor's Christmas Cheer Fund.
He made the remarks during the handover ceremony of proceeds of the 2016 Mayor's Christmas Cheer Fund at Civic Centre two weeks ago.
The mayor said he heard disturbing news about officials at the receiving institutions diverting the donated groceries and money to their own personal use.
"There are stories which I'm hearing at the places where we are giving these goods. I am sorry, but I am coming there. I heard very disturbing news concerning some of you. If we give you, go and give the goods to the rightful people.
"We have our elderly, the disabled and the blind. For they do not see, you put the goods behind. We have children and these goods belong to them so do not give them left overs," said Fidze.
He said corruption by those in charge of charity institutions will not be tolerated, with resources now getting scarcer in the difficult economy which has seen less people contributing to the fund.
"This list I have this year is not the usual list. We have reduced it by almost 60 percent from what we used to give and the list corresponds to what we have," said Fidze.
The fund is a customary fundraising initiative which is designed to mobilise resources that are then distributed to the elderly, the poor, as well as disabled and disadvantaged children towards Christmas time.
This year, the fund raised US$7 652 which was donated to such charities as Copota School for the Blind, Alpha Cottages children's home, Zimbabwe Association for the Visually Handicapped, Pioneer Trust, Masvingo General Hospital and Mucheke Old People's Home among others.local
Share !