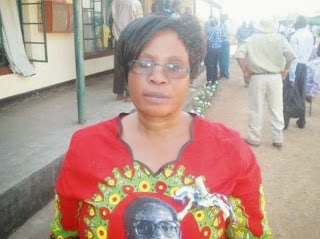 Former National People's Party (NPP) Masvingo provincial chairperson Shylet Uyoyo has died.
Uyoyo passed away today, January 12, 2017, in Zvishavane after a short illness.
Prior to her death, Uyoyo had resigned from NPP saying she was a taking a sabbatical from politics.
NPP national spokesperson Jeffreyson Chitando confirmed the death of Uyoyo saying the cause of death was yet to be ascertained.
"Former NPP national executive women wing committee member Shylet Uyoyo is no more. Though she had resigned from our party, we remember the role she played in building this party.
"She sacrificed her time and resources to build the party. Uyoyo's dedication to this country will be greatly remembered as she fought for the liberation of this country.
"NPP president Dr Joice Mujuru and the whole party would always remember your contribution to the struggle for a democratic Zimbabwe," said Chitando.
Uyoyo was expelled from Zanu PF in 2014 during the 'Gamatox' purges but she recently made indications of re-joining Zanu PF.top news
Share !