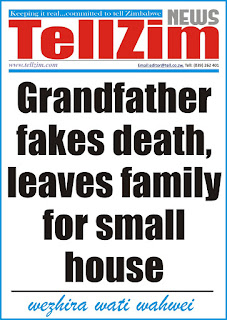 BIKITA - A man from Murambiwa village under Chief Mkanganwi left tongues wagging after he left his wife and kids for a mistress before faking his own death to prevent people from looking for him.
Freddy Chimbunde, whose age was given as 75, put his relatives and friends in a panic mode a few days after Christmas Day when he used his mistress' daughter's mobile phone to call his relatives pretending to be a stranger who had found Chimbunde's body hanging on a tree.
Chimbunde had reportedly been having an illicit affair with a married woman whose husband is saving a prison term. The woman was identified as Noster Mutanga.
Mudavanhu Mundenga, who is the Murambiwa village head, confirmed the incident saying he was disgusted by the shameless incident which he said was against traditional African custom.
He said he had taken the issue to Chief Mkanganwi's court since Chimbunde and his lover failed to attend a village meeting he had called to deliberate the matter.
"It is disgusting that elderly people are at the forefront of mischief instead of them being the role models. I have taken the matter to Chief Mkanganwi's court since he and his lover did not attend the village court I called.
"Chimbunde has lost the respect that we had for him and I am considering evicting him from my village since he has proven to be shameless.
A close family member who spoke on conditions of anonymity said when word of Chimbunde's supposed death began to circulate, friends and relatives from all over came to pay their condolences and to commiserate with the grieving family.
The source said mourners spent almost a week gathered at the 'deceased's' homestead while men searched the forest looking for the body.
All the while, Chimbunde continued to play his games, calling anonymously and giving confusing directions about where the body was.
His mistress, who is known in her village for her drinking habits, later sold out the deal and revealed that Chimbunde was at her place.
Relatives then went to check with Mutanga and witnessed the shock of their lives when they found the elderly Chimbunde hiding behind the door of one of the houses.
When contacted for a comment Chimbunde threatened that if people continue pestering him about the matter, he would this time around hang himself for real.local
Share !