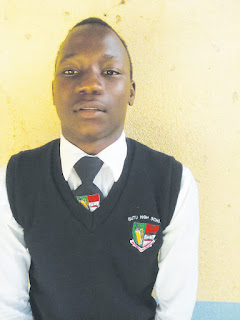 GUTU – A highly intelligent Gutu High School pupil who jumped a class at secondary level is now doing his upper six, a notable record by any measure.
Sixteen-year-old Chitsidzo Dengura sat for his 'O' level examinations in 2016 when he was only 14-years-old and passed 15 subjects, scoring 14 As and one B.
Most of his age mates are mainly in form four although there are many others who are still sweating it out in form three.
Gutu High School head, Mirirai Mutanda said Chitsidzo's extraordinary intellect became apparent right from the time he was doing form one.
"While in form one, Chitsidzo would give himself form two work and get better marks than all form two pupils. We then decided to allow him to skip form two because he had already done the work with distinction," said Mutanda.
He described the whiz kid as a book worm who would go to the toilets to read if he finds the class to be noisy.
"He has always distinguished himself from others students because you do not have to force him to read. You may, instead, need to force him to stop reading.
"We even advised his parents to monitor him as we thought the child could have developed some mental problems," said Mutanda, adding that Chitsidzo would resist any call to take a break.
A winner of many book prizes, Chitsidzo is studying six subjects which are Maths, Physics, Chemistry, Biology, Computers and Business Studies.
He is a beneficiary of the government's Science, Technology, Engineering and Mathematics (Stem) initiative, which pays his school fees, and was awarded a Higher Life Foundation scholarship, which foots his holiday lessons fees bill.
He also attends vocational trainings for entrepreneurship and leadership skills courtesy of Higher Life Foundation.
"I am working very hard at the moment. I want to pass all the subjects that I am doing with clean As. I know it's not easy but with hard work, it is very much possible," Chitsidzo told TellZim News.education
Share !