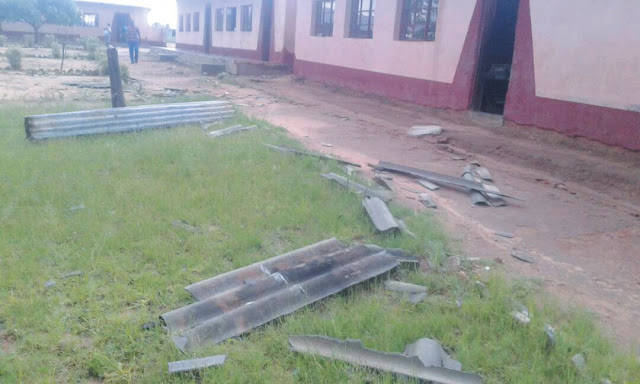 Chinonga Primary School after the hailstorm

GUTU – The effects of a heavy, violent and windy hailstorm that occurred on January 09 is still being felt by two primary schools, Shumbairerwa and Chinanga that now have to cope with reduced capacity.
The day started as the other normal opening days but it ended with an unexpected hailstorm that started at around 14: 00 hrs and lasted up to 19: 00 hrs.
At Chinanga, which is in Ward 13 under Chief Mazuru, the storm blew off roofing sheets from two 2 x 2 classroom blocks which housed grades 3, 4, 5 and ECD. Four classrooms out of the available eight were affected, leaving the school to manage with only four classrooms housing about 240 pupils from ECD A up to grade seven.
The asbestos sheets that were sept off the roof hit other sheets thereby creating holes on them.
District Schools Inspector (DSI) Sonny Chirikure said the heads of the affected schools were advised to engage Gutu Rural District Council (RDC) as the responsible authority and the District Administrator (DA) who is the head of the Civil Protection Unit (CPU).
"We have forwarded our report to the PED for the ministry to see what they can do to assist, because as the ministry, we are supposed to follow the right channels," said Chirikure.
Speaking to TellZim News, Chinanga Primary School head, Ettie Makarudze said the storm was violent and some books in classrooms were soiled.
"I however felt relieved because it happened after we had dismissed the school pupils so there were no any reports of injuries," said Makarudze.
At Shumbairerwa Primary School, under Chief Munyaradzi, two staff houses accommodating student teachers had their roofs destroyed, leaving furniture to be socked in rain.
Three classroom blocks also lost their roofs and they still pose a danger to learners and staff members alike.
School head Kirion Nzuwa said that his own office was not spared as water found its way through various week points.
"In trying to cope with the situation, the school has allocated one room each to the affected teachers at other houses that were not heavily affected," said Nzuwa.local