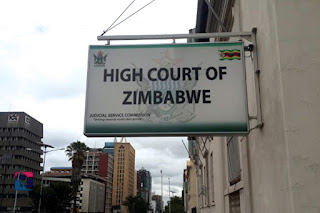 MASVINGO - There was drama at the High Court recently, during the official opening of the 2018 legal year by judge president Justice George Chiweshe when a mentally challenged woman launched a scathing attack on the guests calling them witches and thieves that have sucked state coffers dry.
The woman stood by the perimeter wall of the High Court and began shouting at the guests who were enjoying some snacks.
She used all sorts of vulgar terms to discredit the event and the smartly dressed guests. She said all the people at the event were responsible for the suffering of many people in the country.
"Munoti hakuna mari saka mota makadzitenga nei. Muri varoyi. Mbavha dzevanhu. Masatanist munorarama nekutambudzika kwevanhu," shouted the woman.
She then proceeded to the High Court main entrance where Chief Fortune Charumbira and Masvingo resident minister Josaya Hungwe were standing and started shouting at them in vulgar terms.
The police tried to restrain the woman but she threatened to beat them up.
Passers-by stood and watched the drama as the woman shouted on top of her voice saying the top of the range cars parked outside the court were dripping with blood of innocent souls.
"Mose munoenda kuchurch zvekunyepera asi muchiita zvechi satanist. Mota dzakanaka kudai makadziwanepi. Muri kuchekeresa vana wevanhu kuti mugare zvakanaka," she shouted.
The police chased after her but the mad woman outpaced them, freezing traffic for a few minutes as she started running along the middle of the road.local
Share !