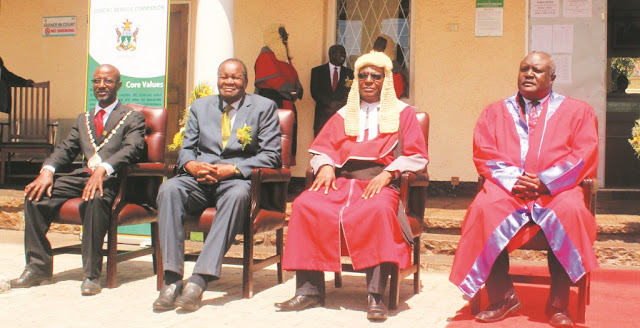 MASVINGO - Judge President, Justice George Chiweshe last week hailed the work being done by the local High Court, saying many backlogs in criminal and civil cases had been cleared.
Addressing members of the judiciary and the media to officially open the 2018 legal year, Justice Chiweshe highlighted what he called the significant rise in the number of both civil and criminal cases that were successfully handled by the court.
The Masvingo High Court was officially opened in May 2016 but only became operational in September of the same year after the appointment of the first resident judges, justices Garainesu Mawadze and Joseph Mafusire.
Justice Chiweshe said a total of 274 civil cases were received during the 2017 legal year, with 205 of them having been completed already.
Some 968 criminal cases were received with 778 of them being completed, representing an 80 percent clearance rate.
It was also heard that the High Court received 470 criminal cases for review from the Magistrates' Court compared to 193 in 2016. Of these, 448 have been completed.
Some 71 criminal appeals and 61 civil appeals were handled by the High Court as compared to 29 criminal and 13 civil appeals in the 2016 legal year. Of these, 56 criminal and 36 civil appeals were completed during the period under review.
Justice Chiweshe hailed the new political dispensation ushered in by Operation Restore Legacy which he said had opened up more democratic space to allow the rule of law to thrive.
"Our overview of the 2017 legal year must recognise that there is a new political dispensation in the country following what has been dubbed "Operation Restore Legacy"….led by the Zimbabwe Defense Forces and has opened up the democratic space and enhanced the rule of law in the country," said Chiweshe.
The official opening of the 2018 legal year in Masvingo was attended by many dignitaries including the Minister of State for Masvingo Provincial Affairs Josaya Hungwe, City of Masvingo mayor Hubert Fidze, National Council of Chiefs president Fortune Charumbira, Reformed Church in Zimbabwe (RCZ) general secretary Reverend Charles Juro, various magistrates, lawyers and prosecutors.top news
Share !