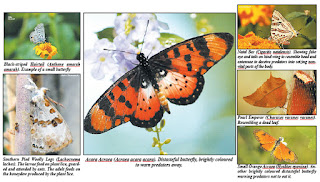 
There are over 20 000 species of butterfly worldwide and Zimbabwe is blessed with over 570 species of butterfly, ranging from small (thumbnail size) to some nearly hand size.
Butterflies are insects, of the Order Lepidoptera stemming from the Greek for 'wing scales' which give each species their distinctive colours and wing patterns.
They are very sensitive to environmental change and are therefore recognised as important indicators of terrestrial environmental health. The declining numbers and variety are real reasons for concern. Urban sprawl, habitat loss, widespread and indiscriminate use of pesticides, farming practices and global warming have all contributed to this decline.
Essentially, the butterfly's life cycle is divided into several stages: egg, larvae (caterpillar), chrysalis (metamorphosis) and finally the winged adult (imago) whose prime purpose is to reproduce. The adult stage of the cycle is brief, usually only a few weeks. Butterflies can often delay emergence from the chrysalis (cocoon) if climatic conditions are not favourable for the emergence of host food plants for the adult and later the larvae (caterpillar).
While most species lay their eggs on suitable host plants for the caterpillars to feed on, some species have unique symbiotic/commensal relationships with ant species which raise or protect the larvae.
Butterflies are attractive prey for many predators including chameleons, lizards, birds and small mammals. Survival techniques vary from species to species. Some butterflies such as the Charaxes species are large and extremely fast flying. Others rely on cryptic colouration, deception or camouflage to avoid being preyed upon. Some resemble dead leaves or the preferred substrate that they frequent. Some have false eyespots and hind-wing 'tails' resembling the head and antennae of the butterfly. Others have prominent eye spots on the wings that again can deceive or startle a predator giving the butterfly a chance to escape.
Yet other species such as the Acraea and Monarch families utilize naturally occurring chemicals such as cyanide and other plant alkaloids to make them distasteful or even toxic to predators. The caterpillars usually feed on cyanide-containing plants and store the poisons in their bodies as bitter tasting chemicals. These poisonous substances are transferred to the adult during metamorphosis. However, in some species, there is evidence that the adults can manufacture poisons within their own bodies or absorb toxins from certain plants. These toxic/distasteful butterflies are often conspicuously coloured to warn predators to leave them alone.
Some species employ Batesian Mimicry to imitate distasteful species as a successful ploy to avoid predation.
Some species are migratory in a regional sense, notably the Brown-veined White (Belenois aurota aurota) and the African Migrant (Catopsilia florella) following new sources of food plants for an exploding population following seasons of good rainfall. These migrating populations can sometimes number in their thousands!local
Share !