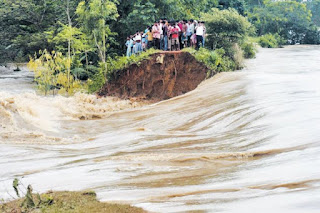 SHURUGWI – Villagers in Dorset area of Shurugwi South say as much as they eagerly expect a good rainy season for successful farming activities, they remain haunted by the obstacles to travel that the season brings due to flooded rivers and lack of bridges.
People who spoke to TellZim News said it was normal in the area for children to miss school for many weeks when rivers and streams in the area get flooded beyond their means to cross.
"There are three rivers that have always restricted business when it is wet; Kashambe, Mtorahuku, and Gwesheche. These rivers have cost us countless livestock every rainy season. When they are flooded it also means no school for our children sometimes for up to two weeks,' said Dumisani Ndlovu.
Ward 21 Councillor Simon Kamurayi said the area was desperately in great need of bridges as that problem has existed for a very long time.
"My ward is in dire need of assistance to construct bridges to curb this problem because almost all the rivers within the constituency have no bridges and that is a danger to the life and welfare of the people," said Kamurayi.
Other villagers who spoke to this publication blamed the local Member of Parliament (MP) Tapiwanashe Matangaidza for allegedly making false promises in the run-up to the 2013 elections and failing to raise local problems in parliament
"Honestly speaking, we were not expecting this kind of neglect from the MP. We last saw him when he was campaigning. We thought he would assist to construct bridges as he promised but has not done that," said Bothwell Chaza.
Matangaidza is under pressure in the ruling Zanu PF party because of his alliance to the vanquished G40 faction.
Efforts to contact him for comment were fruitless as his mobile phone was not reachable.local
Share !