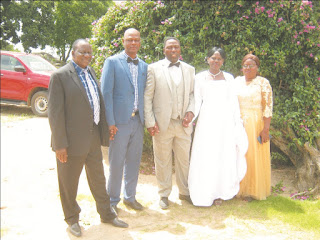 NYAJENA – Professor Wiseman Magwa and his wife Dr Simurofosa Magwa recently held a double ceremony for their 30th wedding anniversary and their academic achievements at their rural home in Tongofa village under Chief Nyajena over the weekend.
The event was attended by over 500 people and the guest of honour was Great Zimbabwe University (GZU) Vice Chancellor Professor Rungano Zvobgo who hailed the couple for not neglecting their rural home like what other educated and successful people do.
"When they succeed in life, many people forget their roots and they want to spend their lives in town. These two have not done that and this is the reason why we are celebrating their anniversary here. People need to develop their homes like what the Magwas have done so that you won't be ashamed of it," said Prof Zvobgo.
Tongofa village head Wicklife Musingarimi praised the Magwas for contributing to the village by helping to facilitate the electrification of the area.
Chief Fortune Charumbira, who was also a guest speaker, weighed in and referred to the Magwas as a light which should illuminate the way of others.
He urged all men to support their wives if they want to study and not to frustrate their ambitions.
Prof Magwa, who is the first and current Vice Chancellor of Reformed Church University (RCU), thanked fellow academics, family and friends saying his achievements were a result of their encouragement.
"I thank my family and friends who supported this event to become a success that it is. I thank all the academics who are here; it has been their encouragement as well as my family's that I have reached this far in pursuit of excellence," said Prof Magwa.local
Share !