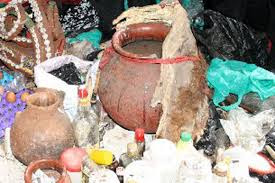 BIKITA – Teachers at Mandadzaka Primary have notified the district education department that they are planning to leave the school en-masse if a senior staff member who is allegedly practicing witchcraft is not transferred.
Teachers who spoke to TellZim News said one of the senior staff members at the school (name supplied) had given them a terrible fright by casting spells at those he does not like.
The school is located roughly 30 km from Nyika growth point along Mutare Road, Fambirai village head under Chief Mazungunye.
The school's secretary, Fiona Mtisi is the latest victim of the teacher's alleged witchcraft acts. It all began towards the end of last term when she reportedly collapsed in her office under mysterious circumstances.
She has been ill ever since and her family has been travelling with her over the holidays, consulting prophets where the evil spirits cast upon her have reportedly manifested and pointed to the senior staff member as the culprit.
The frightened teachers, with the support of parents, are now demanding that either the alleged evil doer is removed from the school or they boycott classes and seek transfers when the new term begins.
"The matter was reported to the police but they advised us to go to headman Mazvimba as the case was neither criminal nor civil but customary. She has been served with summons from the headman but we are yet to see if she will come to court because she just disappeared from the school after noticing that the issue was becoming serious," said a teacher who preferred anonymity.
The teacher also said district education officials visited the school on Saturday, December 30, and were surprised that the issue had not been reported earlier.
Another teacher said he feared the worst would happen if he remains at the school and will leave if the alleged culprit is allowed to stay.
"Hazvina kutanga nhasi, vadzidzisi vazhinji vakaroveswa nezvidhoma nemunhu uyu vamwe vachinzi mhosva dzavo ndedzekumukunda kudzidzisa nekutererwa nevana. Uyuwo secretary ari kufira yebasa rake. Zvakabatwa pachena kuti anoda kuti minin'ina wake atore basa iroro," said a teacher who also spoke on condition of anonymity.
When contacted for comment, School head Alexander Masarira said he was yet to find out exactly what was happening with the district education office.
"I am still away enjoying my holiday in my home area and have not heard of that. I will find out with the district office," said Masarira.local
Share !