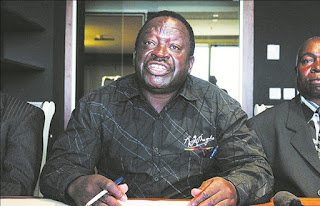 CHIREDZI - Zimbabwe National Liberation War Veterans Association (ZNLWVA) secretary general, Victor Matemadanda shot down demands by war veterans to seize Tongaat Hullet Zimbabwe's land over the company's managing director (MD) Sydney Mutambiwa's alleged abuse of workers and failure to heed a court order granting employees a pay rise.
Addressing war veterans and some Tongaat Hullet workers at Tshovani Stadium last week, Matemadanda argued it was not advisable to seize the sugar company's land merely over allegations of inhuman treatment being levelled against Mutsambiwa, saying he would personally meet the managing director and solve the problems once and for all.
"I am seeing some of you holding placards with the message 'We are going to take that land'. I say a big NO to that. We don't take their land but we correct each other when there is a problem," said Matemadanda.
He said Tongaat Hullet should respect the arbitration ruling delivered by Justice George Smith, which the company has however appealed at the High Court stating that the current state of the economy did not allow them to give an increase.
"Mutsambiwa should come to my office. If a court gives an order, it should be followed and we do not want workers to be abused. President Emmerson Mnangagwa went to Davos, Switzerland for an economic forum so I don't want the international community to misquote me. We should respect the rule of law," said Matemadanda.
He said Mutsambiwa must not defy the labour ruling which ordered Tongaat to increase its workers' salaries. Matemadanda said some workers were saying the former managing director, a white man, was far much better than the incumbent.
"I saw one of the posters suggesting that the former managing director (Simon) Cleasby was far much better than Mutsambiwa. . .If you see the people of Zimbabwe crying foul like that, it means there is something wrong with the administration. I asked why people do not approach Mutsambiwa and talk to him about these issues and I was told he moves around with people armed with guns.
"I investigated the issue; I heard there was arbitration and the court barred the dismissal of workers who had staged a demonstration. If it is indeed true that people were dismissed, then this must be corrected by tomorrow," said Matemadanda.
Matemadanda however, later blamed the administration of the former President Robert Mugabe for creating lawlessness in the country.
"This is not Mutsambiwa's problem but the administration of Mugabe promoted lawlessness in the country. President Mnangagwa has since restored rule of law in this country and we expect everyone to respect the rule of law. Court decisions must be upheld and respected," said Matemadanda.
When contacted for comment, Tongaat Hullet corporate affairs and communications manager Adelaide Chikunguru said she could not give a comment at that stage.local
Share !