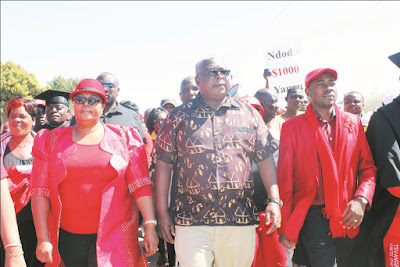 The Morgan Tsvangirai-led Movement for Democratic Change (MDC-T) is in a catch-22 situation over the future of the party and way forward ahead of the forthcoming harmonised elections with Tsvangirai's health deteriorating so much that he recently made signals of stepping down.
Tsvangirai went public that he has cancer of the colon in 2016 and many analysts believe that he has done his part as a true statesman. They are also convinced that Nelson Chamisa, one of his three deputies, is poised to take over.
In his New Year' message, Tsvangirai chronicled the journey he has travelled from the formation of the MDC in 1999 to date, saying he was seriously contemplating the possibility of handing over leadership to the younger generation.
"I am looking at the imminent prospects of us as the older generation leaving the levers of leadership to allow the younger generation to take forward this huge task that we started together so many years ago with our full blessing and support.
"It was therefore not by accident but by design that when I disclosed to you my health status, I also took a bold step to appoint an additional two Vice Presidents to assist me. As I have said before, while politicians only think about the next election, true statesmen think about the next generation, for current leaders are only but caretakers for future generations.
"We do not have any entitlement to lead but we have a duty to serve," said Tsvangirai in his New Year message.
However, many in the party have voiced their unwavering support for the former Prime Minister to continue as party leader arguing that he was the most suitable to take them into elections. They say what the ailing veteran opposition leaders needs is just some rest so that he can recuperate.
Should Tsvangirai feel the need to rest and pass over the button, one of his three deputies Thokozani Khupe, Nelson Chamisa and Elias Mudzuri, is likely to take over but there are disagreements over how the successor would be chosen.
Some party members would like Tsvangirai to be given the right to anoint a successor of his choice, a position that would likely favour Chamisa, but there are also others who want an extra ordinary elective congress to select the successor.
Political analyst Dr Takavafira Zhou said in the event that Tsvangirai quits, the party should appoint someone who would have won popular support through a democratic process of voting.
He said all the three deputies have experience and they qualify to take over but each has his/her own weaknesses, making it obligatory for them to work together.
"Mudzuri is a shrewd administrator and is respected by donors. His weakness is that he is not an orator and is perhaps less popular with the public than the others.
"Chamisa is a diamond. He may not be a perfect diamond with refined edges but he is destined to be one of the greatest politicians to bless this country. The only challenge he will face is that he is too young.
"Being a woman who has demonstrated unwavering commitment to the party, Khupe cannot go unnoticed. She however made a mistake of showing commitment more to a region than the whole nation," said Dr Zhou.
Another analyst, Mabweazara Mugodzwa said whether sick or not, Tsvangirai should groom a successor in the name of Chamisa.
"Chamisa has been so loyal to the party for a very long time and he should be rewarded. Together with Tsvangirai, he was brutalised by Zanu PF but he did not betray the struggle. He has kept fighting until he was made vice president.
"Chamisa is more popular than Mudzuri and Khupe combined. Chamisa appeals to the young generation which constitutes the majority of voters. He is the best foot forward for the MDC-T and even if they go for a vote, he would win," said Mugodzwa.top news
Share !