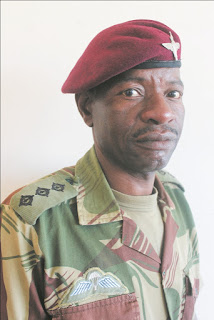 12 Jan 2018 - Captain Francis Chanduru has been appointed the new Public Relations Officer (PRO) for Headquarters 4 Infantry Brigade. He replaces Lieutenant Bigboy Mazivofa who has been posted to the Headquarters Presidential Guards Brigade in Harare in the same capacity.
Prior to his new appointment, Captain Chanduru was with Headquarters Presidential Guards.
Born on 01 January 1965 in Gutu, he attended Chikara Primary School in Nyazvidzi and later moved to Nharira Primary School in Chitsa. In 1979, he moved to Kwekwe High School for his Ordinary and Advanced levels before being attested into the ZNA in 1986 with the formation of the then elite 6 Brigade.
On completion of his military training, the Masvingo born soldier was posted to Parachute Regiment as a rifleman. After taking various military courses and a diploma in Public Relations.
The officer joined the ZNA Public Relations Directorate, publishers of the ZNA magazine as a junior reporter in 1991 and was appointed Public Relations Officer the following year in 1992. Having done in-house and professional courses he was posted to the Headquarters Presidential Guards along the way serving with the Mechanised Brigade.
The officer rose through the ranks to become a Staff Sergeant in 2004 before he was recommended the same year to undergo the Basic Officers Course (BOC) at the Zimbabwe Military Academy in Gweru.
After completing the course, he was commissioned as a Lieutenant and later promoted to the rank of Captain; the rank he currently holds. Captain Chanduru is currently studying for a degree in Media Studies with UNISA. He is recipient of medals which include the Independence, Mozambique campaign, Ten years, Long and Exemplary and the DRC campaign medals.
He is married and has five children.local
Share !